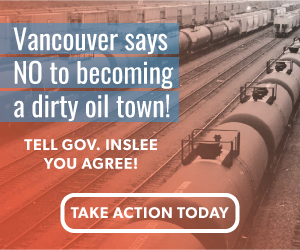 The Tesoro-Savage oil-by-rail terminal proposed for Vancouver, WA is simply too risky. It would bring up to 5 fully loaded oil trains every day, 365 oil ships over the Columbia River bar each year, and facilitate over 54 million tons of greenhouse gas pollution.