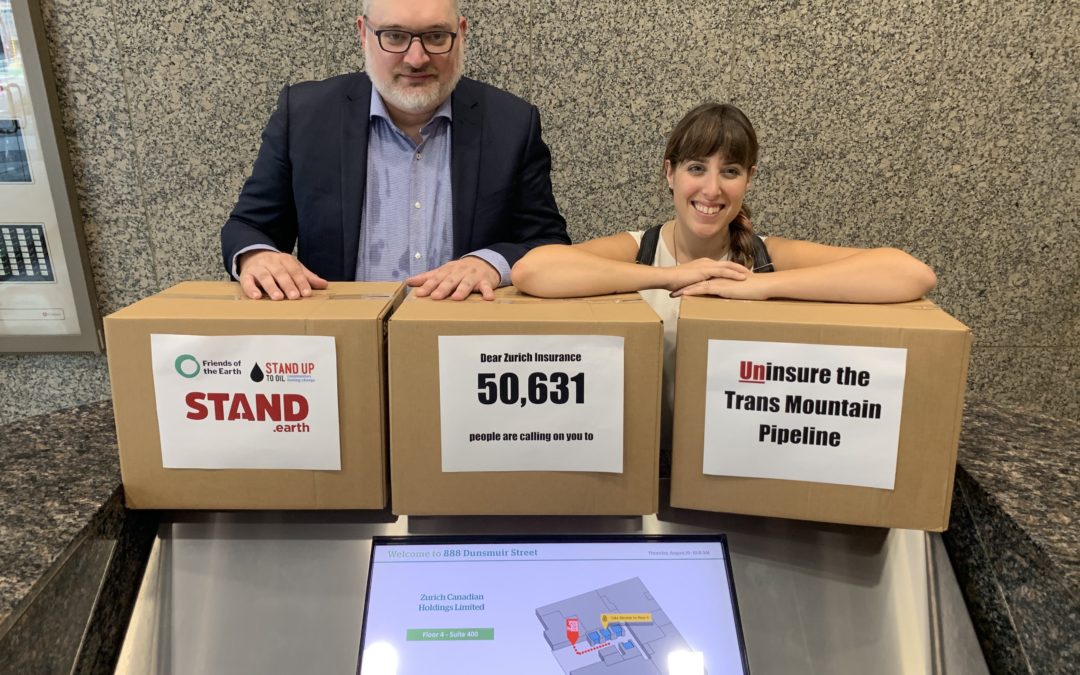 UNCEDED COAST SALISH TERRITORY (VANCOUVER, BC) — Representatives with Stand.earth today delivered a petition to Zurich’s Vancouver office signed by more than 50,000 pipeline opponents calling on Zurich and other insurance giants to drop the Trans Mountain Pipeline. The petition includes 50,631 signatures from Canadian and U.S. supporters of environmental organizations Stand.earth, Stand Up to Oil, and Friends of the Earth US.

Get photos from the petition delivery here.

“We are calling on insurance giant Zurich to not insure the expansion of the Trans Mountain Pipeline. Canada’s oil sands industry, which is one of the most climate intensive forms of oil in the world, cannot be allowed to continue to grow — or we will lose in our global fight to maintain a climate safe world for future generations. That is why stopping the expansion of this pipeline is so important,” said Sven Biggs, Climate and Energy Campaigner at Stand.earth.

Earlier this month, a global coalition of 32 environmental, Indigenous, and citizen groups launched a campaign asking the companies listed on the insurance certificate for the existing Trans Mountain Pipeline to drop their policies ahead of the August 31 renewal deadline.

Citing massive political and environmental risks from one of the most contentious projects in Canada’s history — the expansion of the oil sands pipeline from Alberta to British Columbia — the coalition sent a letter to the companies listed on the insurance certificate, as well as companies considering insuring the pipeline expansion, asking them not to insure any future oil sands projects. Only 12 companies out of 27 responded to the letter.

The letter details the growing political and Indigenous opposition to the Trans Mountain Pipeline in the U.S. and Canada and explains how the pipeline expansion would contribute to the growth of the oil sands industry, the largest and fastest-growing source of carbon emissions in Canada. According to the Carnegie Oil-Climate Index, Canadian oil sands are one of the dirtiest, highest-carbon sources of oil on the planet.

The Canadian federal government, which purchased the existing pipeline and the expansion from Kinder Morgan after the company struggled to finance the expansion, is in the process of renewing its liability insurance for the existing pipeline, and will be required to provide additional insurance for the pipeline expansion 6 months before it goes into operation. The coalition hopes that by pushing companies to drop their existing insurance policies with Trans Mountain and to stop insuring future oil sands projects, it will show the Canadian government that the expansion is uninsurable and should not continue. If the insurance industry doesn’t provide coverage, Canada will be forced to self-insure the expansion, putting taxpayers on the hook for an additional $1.1B.

In June, Zurich, the largest insurance company in Switzerland, announced a policy to restrict insurance for, and divest from, the oil sands industry. In its response to the letter, Zurich, which is listed on the certificate as the primary liability insurer of the Trans Mountain Pipeline, said it would continue to insure the existing pipeline while having discussions with the Canadian government on whether the existing pipeline would allow Canada to meet its climate commitments under the Paris Agreement. Zurich did not comment specifically on the expansion.